Back in 2009, when I first got pregnant with Addy and Zack but before we knew they were twins, Max and I had a heated conversation about whether or not we would find out the sex.  He was adamant that we be surprised in the delivery room.  I was adamant that I know what color bumper to order (which, in retrospect, was a terrible argument since our bumper sat in the closet unused once I heard that they are death machines).  Lucky for me, a few days later we found out we were having two – a surprise which thankfully satiated Max’s desire to be surprised for the rest of that pregnancy.

Not surprisingly (Eh? Eh? You like that?), when we found out I was pregnant again this past fall and we knew for sure it was one, Max laid down the law.  No discussion, he said, this one is going to be The Surprise.  As counter as it is to my nature to be surprised (I am so horrible I sniffed out Max’s plan to propose to me), I decided to go with it.  He seemed so excited about the prospect of not knowing until the day the baby arrived and, um, sure, I thought it would be cool to find out while choking back puke with my guts splayed open on an operating table.

Despite the inner demons screaming at me to fold, I made it through genetic testing and multiple doctor appointments without secretly forcing anyone to tell me the sex.  I have, however, hung on to every opinion of any passerby who thought they held the key to predicting gender.  The saleswoman at Bloomingdale’s said it is a boy because I’m carrying front and center.  The lady at the nail salon said it’s a girl because I’m carrying front and center.  The saleswoman at the watch store said it’s a girl because when she asked to see my hands, I presented them palms down.  The Chinese Gender Predictor on babycenter.com told me it’s definitely a boy when I used the due date as an input…but then it told me it’s definitely a girl when I used the date of conception.  My lack of morning sickness screamed boy.  My pizza face assured me girl.  I’m pretty sure the consistency of my earwax meant it’s going to be a hermaphrodite.

Needless to say, all was going well with Max’s quest for ignorance until we had our anatomy scan last week.  (anatomy scan = mega-ultrasound where a technician takes about 100 photos and measures almost every inch of the baby to make sure everything is OK.) When our technician retrieved us from the waiting room, Max greeted her with a loud and clear announcement that we absolutely did not want to know the sex.  He didn’t quite convey his usual “Hi.  How are you today?  Can you believe this cold weather?” vibe as much as he conveyed a “We don’t want to find out, so don’t f-ck this up for me, understand?  I’ve been waiting my whole damned life to be surprised about the sex of my baby and this is my last chance.  If I so much as see one sliver of a penis or a vagina today, I will end you.” vibe.

So we all calmly and happily walked into the ultrasound room and the technician got to work.  Right away, she told us to close our eyes because she was about to get the necessary pictures of the genitals.  We sat with our eyes seared shut until she gave us the all clear and then settled in to enjoy the rest of the show…the rest of the peep show, that is.  No less than five minutes after she told us to open our eyes, she had a shot up on the screen that looked like this: 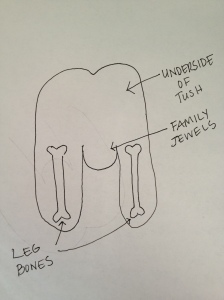 Our kid either had huge balls or was in the process of birthing it’s own baby in utero.   All was silent in the room and the technician held the view for a pretty long time, so despite my absolute certainty that we were looking at a boy, I wondered why no one else noticed.  For the next ten minutes, I laid quietly on the table, my heart in my stomach and racing at the thought that Max was going to be colossally disappointed that The Surprise was ruined.  And then, as the technician started measuring the baby’s legs, I saw this on the screen: 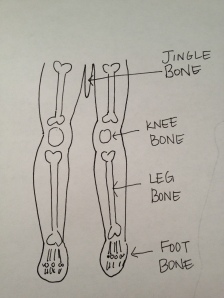 Again, she left the shot up for a good two minutes or so.  But now with double confirmation, I was sure of three things: 1. We were having a boy, 2. Our technician was a moron, and 3. Max had eyes and a pulse and therefore knew too.  Surprise!!  It’s a boy.

Neither of us said a word until we walked out in the hall.  I saw the massive disappointment in Max’s eyes.  Alas, he was not fated to be surprised. We spent the next few hours trying to sort out the disappointment of finding out in such an anti-climactic way from the excitement that we were having a boy.

In the biggest surprise yet, I was bummed that The Surprise was not to be.  As much as I like to know everything that is going to happen in my life before it happens, I had really started getting into the idea of being surprised for once.  The only way to get past the weird mix of emotions (besides slapping ourselves in the faces and screaming “Stop whining you jerks!  The important news of the day is that the baby looks good!”) was to call the doctor the next morning, confirm that we indeed saw twigs and berries on that screen, and start getting psyched envisioning our future family of one little girl and two little boys.

Did you read that Max?  One girl and two boys.  Not one girl, two boys and another baby three years from now who will surprise you with his or her gender in the delivery room.  No dice, I’m done.  Game over after this one. And if you keep telling me you’re going to convince me to have four, I’m going to sign you up for a surprise vasectomy.