The last few weeks have been a challenge.  Zack has begun experimenting with indecision.  I’m not sure if he is intentionally trying to drive me crazy, if he is truly having trouble making decisions, or if he has blown a fuse.  Whatever it is, I would sell my soul to make it stop.  When he wakes up in the morning, it starts:

I give it to him.

I take it back.

I give it back to him.

He shorts out like this all day long.  I’m done on the potty. No, I’m not done yet!  I’m not hungry for dinner.  I want dinner!  Tuck my blanket in.  I don’t want my blanket!  It feels like I am the tennis ball being whacked back and forth in the most epic, endless tennis match in US Open history. 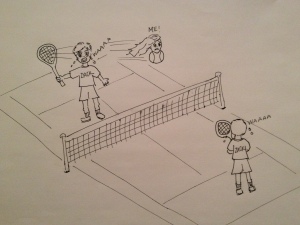 My response to this behavior has ranged from fully indulging it, to trying to reason with him, to setting limits/channeling Regis Philbin (I’m going to ask you what you want one more time and that will be your final answer).  Nothing has worked.

Three years is a crazy age.  It is an age of contradiction, not just evidenced by Zack’s vacillations.  Three-year-olds somehow manage to simultaneously be the most adorable and the most maddening they have ever been.  They love saying “no” even if they mean “yes.”  They want their independence, while always keeping mom and dad within arm’s reach.  But the contradiction that most throws me for a loop is this: their intellectual growth is exponential, yet it’s never entirely clear if they really understand.

This last contradiction is what has gotten me into serious trouble while trying to navigate Zack’s era of indecision.  He has been learning so much and understanding so many new, complex concepts lately, that I became convinced his back and forth antics were entirely deliberate and that he was intentionally trying to drive me nuts.  This “realization” led me to take a much more no nonsense approach and I started yelling at him and giving him time outs (which also did not work).

Then, on Tuesday morning, I was eating breakfast with Addy and Zack and I made eggs.  Zack started in with the routine – I want eggs, no I don’t, I want eggs, no I don’t.  Just as I was about to shift into I’m-not-going-to-take-this-crap mode, Addy turned to me and said, “Mommy, I think that he wants….” and silently mouthed the last few words of the sentence.  I couldn’t read her lips so I asked her what she had said.  Very slowly, over-enunciating every word, she said, “No, Mom-my. I was tell-ing the ba-bies that we’re go-ing to the paaarty.” At that moment, with my son toggling back and forth between eggs and no eggs and my daughter looking me in the eye but pretending to have a conversation with her imaginary babies, I had the distinct feeling that I was in the psychiatric ward of a hospital and I wasn’t sure which one of us was the patient.

I suspect that my ultimate sanity will depend on this moment of insanity.  I’m beginning to realize that no matter how brilliant a three-year-old can appear, soaking up new ideas like a sponge and asserting their independence, it is critical to remember that their brains do not yet function at a level of optimal rationality.  As parents, it feels great to see our kids begin to function like “big kids” socially, emotionally and intellectually, but it will still be a long time before this is a constant.  Sometimes, for their sake and ours, we have to look through a different lens of lowered expectations and let that guide how we handle difficult behavior.

So while Zack still kicks into his waffle routine at least three times a day, I know that I probably won’t tame his outbursts with even louder outbursts of my own.  Patience, as hard as it is to gather, will go a lot farther than yelling.  Rather than assuming he knows exactly what he is doing and getting pissed about it, I need to remind myself that he may just not be capable of controlling this behavior yet.  This, I believe, will be the key to riding through such a tough phase a little more gracefully.  And if not, feel free to stop by and visit me in my padded room at Bellevue.