Admission: I love the show Shark Tank. In case you’ve never heard of it, it’s a show on ABC in which entrepreneurs pitch their ideas to a panel of investors hoping to land venture capital. Here’s a link to the website http://abc.go.com/shows/shark-tank/index. I wish I could come up with a great idea and get a chance to go on that show and kill it. I’ve been thinking that I should invent a series of fixes to address universal parenting problems, because when parents have problems, they’ll buy anything to try to solve them. Here are a few ideas that I think would bring the Shark Tank judges to their knees: 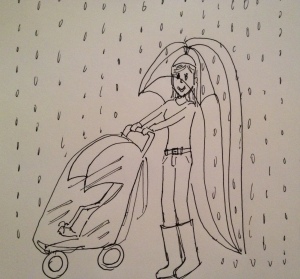 Every time it rains, I get screwed. I take the kids out in the stroller with its perfectly fitted rain cover to keep them dry and warm and by the end of our walk an unsuspecting bystander would think that I got dressed before I showered. I tried buying an umbrella that attaches to the stroller handle, which was promising, but the umbrella is so tall, it ends up looking like someone picked me up by the top of my head with a toilet plunger and dipped the rest of me in the toilet. Holding an umbrella in one hand and pushing the stroller with the other works a little better, keeping more of my head covered and most of my front, but inevitably my entire back gets drenched. Luckily, I have dreamed up the perfect solution to this problem: The Umbrella Mullet. It is an umbrella hat that straps to your head like a bike helmet and is shaped like the Darth Vader’s head gear, except it is much wider and the back hangs down to your ankles. Very stylish, frees up your hands to push the stroller, keeps you dry. This thing is going to be the next Post It Note for sure. 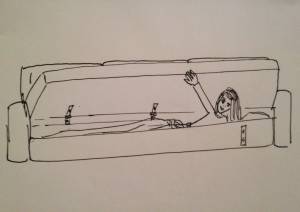 Ever wish there was a place in your home where you could steal a moment of solitude without completely leaving your kids unsupervised and free to trash the place? I give you the Couch Coffin. It looks and feels like a regular couch but opens up to reveal a (temporary) resting place as comfortable as the beds at the Four Seasons. When your kids aren’t looking, hop in and rest your weary body while spying on them through the one-way-mirror eye slot. For a small premium, you can upgrade to the Couch Coffin 2. The Couch Coffin 2 comes with a microphone and speaker that enables you to rest while simultaneously telling your kids, in the voice of Mr. T, to stop putting stickers all over the coffee table. 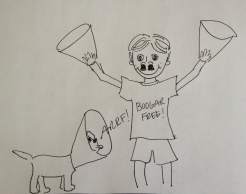 We all know that clearing the boogs out of one’s nose is a regular necessity. At some point between the ages of two and twenty, someone teaches us how to do it in a sanitary and private manner. Unfortunately, until we are able to impress this important life lesson upon our children, they engage in an awful lot of public nostril digging. Just yesterday, I was proudly handed no less than seven green, gluey boogars. Wouldn’t it be great if, whenever the kids have colds, we could put little cones on their wrists that prevent their hands from touching their noses? They would look and function like a miniature version of the cones that people put on their dogs’ necks when they are recovering from an injury. While these hand cones would spare us the repeated vision of little Joey pulling a foot-long jump rope out of his nose and then rubbing it all over his chair, we still have to tackle the issue of the boogs streaming down his face into his mouth. (Are you gagging yet?) That is why each pair of hand cones would come with a free pair of nose plugs. Just slap on the cones, stick in the plugs and tell those boogies to beat it!

So what do you think? Would you invest? What? I shouldn’t quit my day job? Shooooooot, I already did.